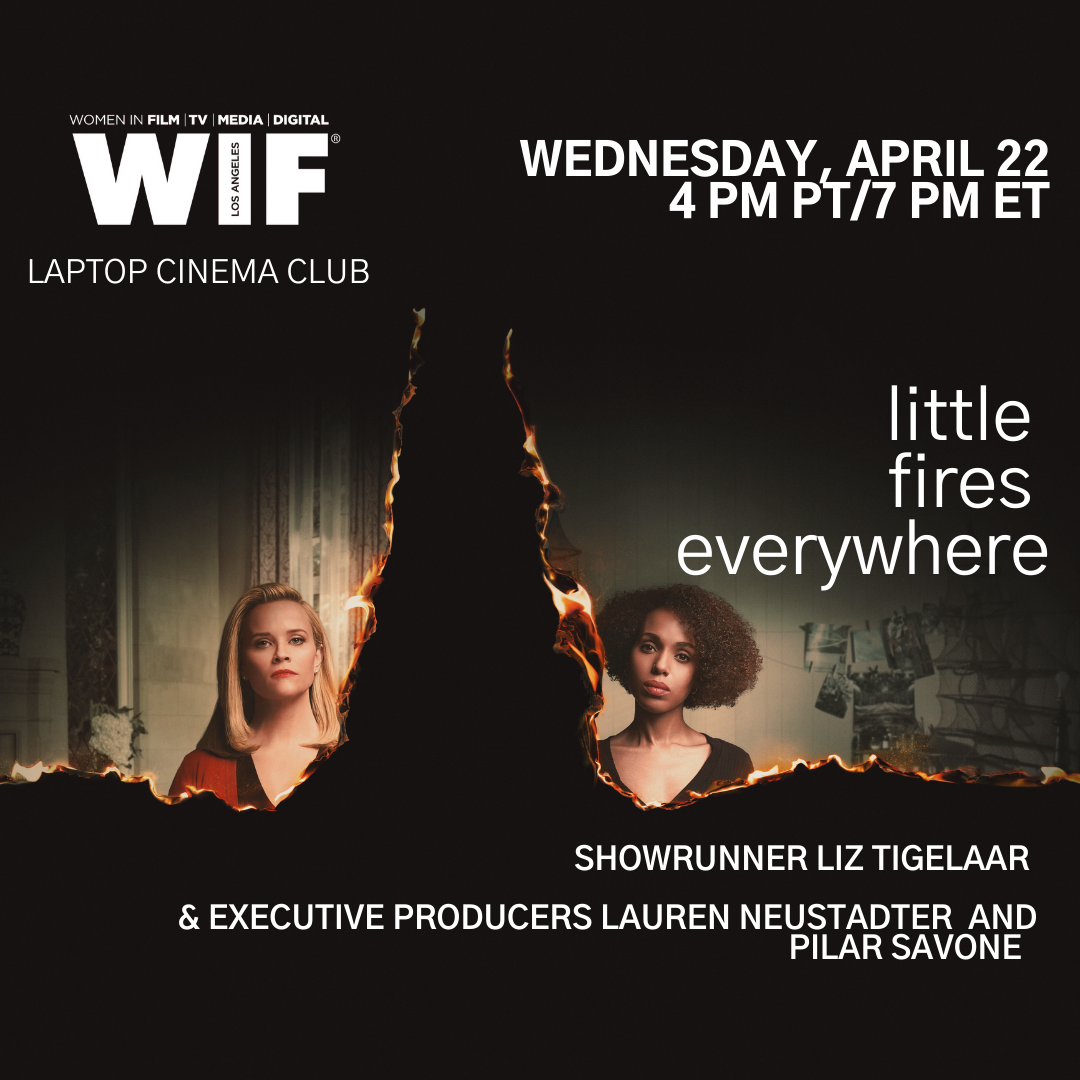 Watch the final episode and then make sure to join the discussion on Zoom with these amazing media makers!

Our Zoom webinar link is here:

Liz Tigelaar is showrunner and executive producer of the Hulu limited series “Little Fires Everywhere,” starring and executive produced by Reese Witherspoon and Kerry Washington, which is based on the bestselling novel by Celeste Ng, and debuted March 18, 2020.  Tigelaar most recently served as showrunner and executive producer of the Hulu Golden Globe-nominated comedy “Casual,” created by Zander Lehmann and executive produced by Jason Reitman. Best known for creating the critically acclaimed drama series “Life Unexpected” which aired on the CW for two seasons, Tigelaar got her writing start on NBC’s groundbreaking drama “American Dreams.”  She went on to write and produce such series as ABC’s “What About Brian,” “Dirty Sexy Money,” “Brothers and Sisters,” “Once Upon a Time,” “Revenge,” “Nashville,” and “Astronaut Wives Club,” along with A&E’s “Bates Motel.” Tigelaar grew up in Dallas, Texas, and Guilford, Connecticut, and graduated from Ithaca College with a degree in Scriptwriting and Politics.  She got her start as an assistant on “Dawson's Creek,” followed by “Once and Again,” where she was mentored by one of her writing idols, Winnie Holzman.

Lauren Neustadter is Head of Film & Television at Hello Sunshine and is an executive producer on the series THE MORNING SHOW (Apple), TRUTH BE TOLD (Apple) and LITTLE FIRES EVERYWHERE (Hulu), and was a Supervising Producer on the critically acclaimed series BIG LITTLE LIES 2. In addition to her work on those shows, she and her team are currently developing television shows and features for Amazon Studios, Disney, HBO, HBO Max, Hulu MGM, Netflix, Starz, Sony/3000 Pictures and TriStar. Before joining the team at Hello Sunshine, Lauren spent over a decade working in film as an executive at Miramax, then at Twentieth Century Fox (with a producing stint in-between). In 2011, she left the feature world to become an executive at FOX network, where she oversaw shows like BROOKLYN NINE-NINE, THE MINDY PROJECT, LETHAL WEAPON and 24 among others. Lauren lives in Los Angeles with her husband and their two children.

Pilar Savone is the executive vice president of production and development at Simpson Street, a production company formed by actor, producer and director Kerry Washington. Washington and Savone produced AMERICAN SON, the filmed adaptation of 2018’s hit Broadway production starring Washington and Steven Pasquale. AMERICAN SON debuted on Netflix after its premiere at the 2019 Toronto Film Festival. The film received a PGA nomination for ‘Outstanding Producer of Televised or Streamed Motion Pictures’ as well as three NAACP nominations for ‘Outstanding Actress in a Television Movie, Limited-Series or Dramatic Special’; ‘Outstanding Television Movie, Limited-Series or Dramatic Special’; and ‘Outstanding Directing in a Motion Picture (Television)’