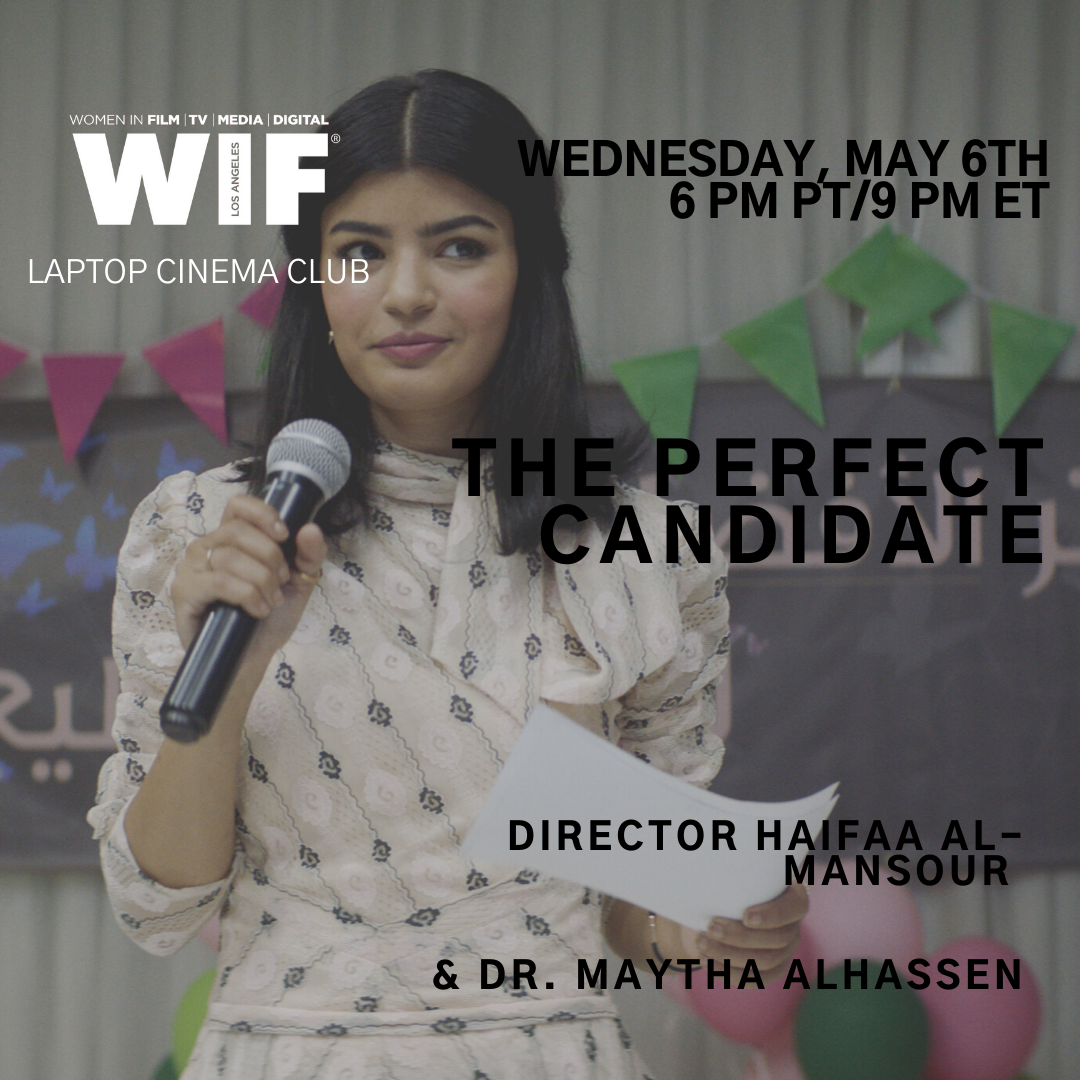 Join us for a post-screening discussion on Instagram Live of THE PERFECT CANDIDATE with director, and ReFrame Rise Fellow, Haifaa al-Mansour in conversation with Dr. Maytha Alhassen​​​​​! Register below to watch the movie beforehand with Vimeo passes provided by Music Box Films. Watch the film, then follow us on Instagram to join the fun on Wednesday, May 6th ❘  6 pm PT/ 9 pm ET.

Please add info@wif.org to your contacts so it does not go to spam.

A revealing look at the changing roles of women in Saudi Arabia from director Haifaa Al-Mansour (Wadjda), The Perfect Candidate follows Maryam, a determined young doctor who runs for city council after the male incumbent repeatedly ignores her request to fix the muddy road leading to her clinic. Despite her father and her community’s struggle to accept her as their town’s first female candidate, Maryam’s creative and ambitious campaign builds momentum, becoming a symbol for a larger movement.

Music Box Films is dedicated to curating a diverse repertoire of films and television from around the world with upcoming releases including Werner Herzog’s documentary Nomad: In the Footsteps of Bruce Chatwin, Haifaa Al-Mansour’s The Perfect Candidate, Pablo Larrain’s Ema, Justine Triet’s Sibyl, and Brian Welsh’s Beats. Music Box Films has postponed the theatrical release of The Perfect Candidate due to COVID-19, but is planning to bring Haifaa Al-Mansour’s uplifting vision to theaters later this year.

Haifaa Al-Mansour is the first female filmmaker from Saudi Arabia. The success of her three short films, as well as the international acclaim of her award winning 2005 documentary WOMEN WITHOUT SHADOWS, influenced a new wave of Saudi filmmakers.

Al-Mansour is currently developing an animated feature with Shadowmachine entitled MISS CAMEL, about a shy Saudi girl who runs off with a sassy street camel to compete in a beauty pageant for camels in Abu Dhabi.

Dr. Maytha Alhassen primarily sees her labor as that of a freedom doula and an engaged wit/h/ness reviving the traditions of the feral femme. She is a historian, journalist, poet, organizer and mending practitioner. As a journalist, she worked as an on air host on Al Jazeera and The Young Turks, also field reporting for such outlets as CNN, Huffington Post, Mic, Boston Review. In 2017 she received her Ph.D. in American studies and Ethnicity from USC and gave a TED talk on her ancestral relationship to Syria. Alhassen has co-founded multiple social justice organizations including Muslim Anti-Racism Collaborative, the Social Justice Institute at Occidental College and Believers Bail Out (a Muslim abolition group). As a Pop Culture Collaborative Senior Fellow, she wrote a report on the representation of Muslims in TV and film, "Haqq and Hollywood: 100 Years of Muslim Tropes and Traps and How to Transform Them." Currently, Alhassen writes for Hulu series "Ramy," is a Visiting Professor in Peace studies at Chapman university, offers yoga, meditation and reiki workshops and trying to find time to write some books.